Researching the topic of pedophilia I spoke with different people. I had a chance to speak with a man who is inside of this damned hell, and probably we can say that he is the “hands” of pedophiles. This man is a photographer – one of those who multiplies and spreads child porn. His real name is unknown, but I managed to get in touch with him via messenger through my acquaintances. I was shocked at what he told me. I guess any sensible person would have almost the same impression if he were to hear those answers. So, here is the beginning of our short correspondence: 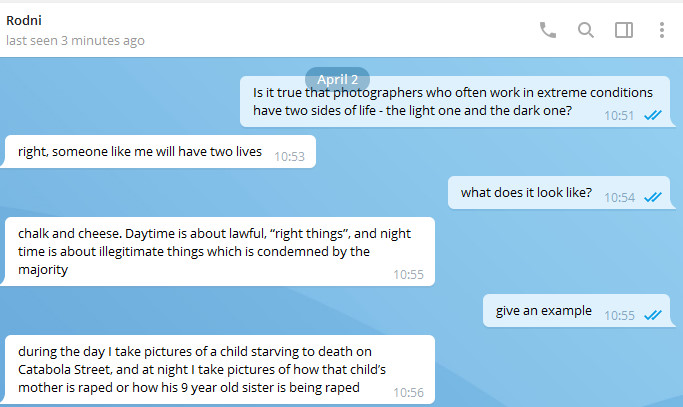 Yanysh Lobzovskiy: Is it true that photographers who often work in extreme conditions have two sides of life – the light one and the dark one?

Rodni: right, someone like me will have two lives

Rodni: chalk and cheese. Daytime is about lawful, “right things”, and night time is about illegitimate things which is condemned by the majority. 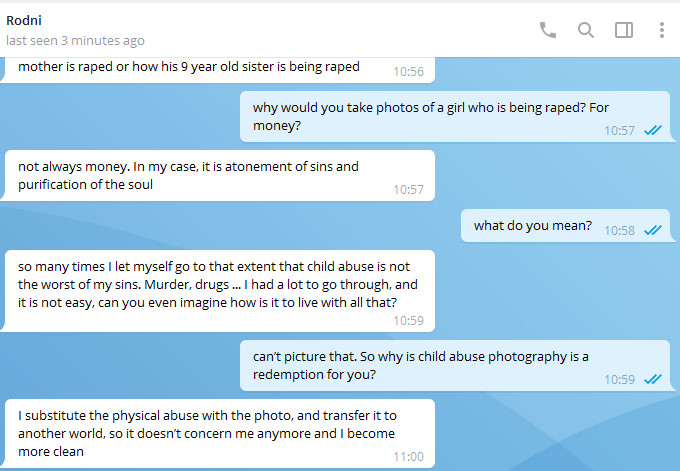 Yanysh Lobzovskiy: why would you take photos of a girl who is being raped? For money?

Rodni: not always money. In my case, it is atonement of sins and purification of the soul.

Rodni: So many times I let myself go to that extent that child abuse is not the worst of my sins. Murder, drugs … I had a lot to go through, and it is not easy, can you even imagine how is it to live with all that?

Yanysh Lobzovskiy: can’t picture that. So why is child abuse photography is a redemption for you?

Rodni: I substitute the physical abuse with the photo, and transfer it to another world, so it doesn’t concern me anymore and I become more clean

What they write is striking in its cruelty, they attempt to justify their dirty work and turn it into some kind of a betterment. More importantly, they do not consider themselves criminals and villains and the fact that they ruin fates of children is the price of their recovery and recreation. Yes, that is how they think, these are their beliefs, but why someone must pay for their beliefs? Why their “cleansing” must be at the expense of innocent children? These and other questions were spinning in my head, but I tried to control myself. It was important to find out more about that life – incomprehensible to us – mired in blood and misfortunes of innocent people, by means of which ones like Rodni “expiate sins”. We continued: 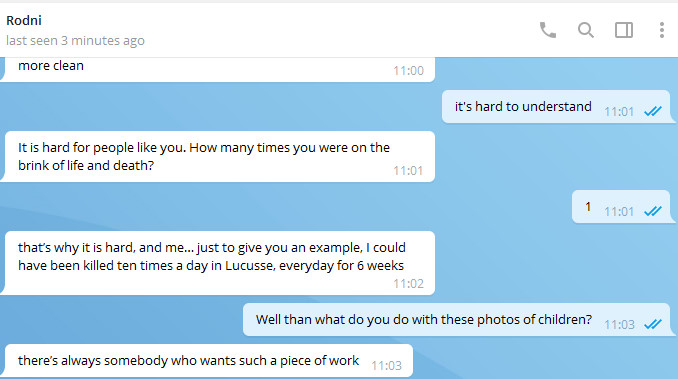 Rodni: It is hard for people like you. How many times you were on the brink of life and death?

Rodni: that’s why it is hard, and me… just to give you an example, I could have been killed ten times a day in Lucusse, everyday for 6 weeks

Yanysh Lobzovskiy: Well than what do you do with these photos of children?

Rodni: there’s always somebody who wants such a piece of work

This is how we ended our conversation with one of the players of this terrible business. Maybe it was because I was expecting to hear something else, something like “just business and nothing personal”, maybe exactly for this reason I was struck to the very roots of my being. I could not even imagine that people engaged in such a terrible thing justify themselves thinking that they are cleansed and become better. Anyways, I am grateful to that person for being frank as it allows us to know more about another world. Who knows, maybe this will help to fight against pedophilia in our societies more effectively.

P.S. As for the nickname of my interlocutor, I guess it is not accidental, remember the story of the maniac photographer Rodney James Alcala?