An anti-government protest in Hong Kong has turned violent, with police and protesters exchanging tear gas and petrol bombs. The march took place despite recent attacks on protesters.

Crowds of protesters staged an illegal march through the Hong Kong district of Kowloon on Sunday, many masked in defiance of laws forbidding face coverings at public gatherings.

The march ended in violent exchanges, with Hong Kong police firing tear gas canisters at protesters from inside a police station in Tsim Sha Tsui. The police also deployed a water cannon, firing abrasive dye at thousands of protesters. 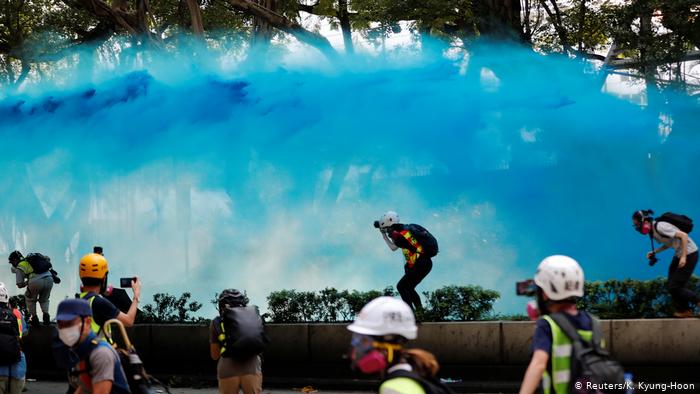 A hard core of protesters threw Molotov cocktails at the station’s iron gate and into the police station compound.

Along the route, protesters trashed storefronts, metro stations and started fires, as well as setting up makeshift roadblocks. 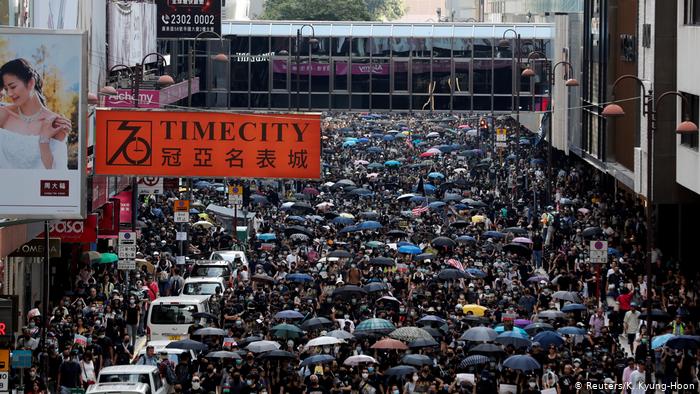 They sang songs and waved placards depicting the Chinese flag as a Nazi swastika. A black banner at the front of the protest stated “Five main demands, not one less,” referring to their demands of accountability and political rights.

Prior to the march, Hong Kong tightened security, stopping some metro services and closing public facilities, while pro-democracy leaders called on citizens to join the protest in spite of the risk of arrest.

Police had prohibited the march in the city’s Kowloon district due to public safety concerns, and a court said the destination of the march — the main rail interchange with mainland China — was at risk of being attacked and vandalized.

Organizers vowed to go through with the event even if it remained banned by police, because Hong Kong’s constitution guarantees the right to protest.

“We don’t think that because police haven’t given their approval we shouldn’t demonstrate,” Figo Chan, vice-convener of the Civil Human Rights Front, said. “Even though they have rejected our appeal, there will surely be many residents taking to the streets.”

At the city’s high-speed rail station in Kowloon, a number of areas were closed off and only passengers carrying tickets were permitted to enter. Food and beverage outlets were also closed.

On Saturday police arrested a 22-year-old man in connection with a knife attack on a teenager who was stabbed and wounded while he was handing out leaflets. A prominent human rights activist, Jimmy Sham, was attacked by men with knives this earlier this week, an attack pro-democracy lawmakers say was designed to intimidate protesters. 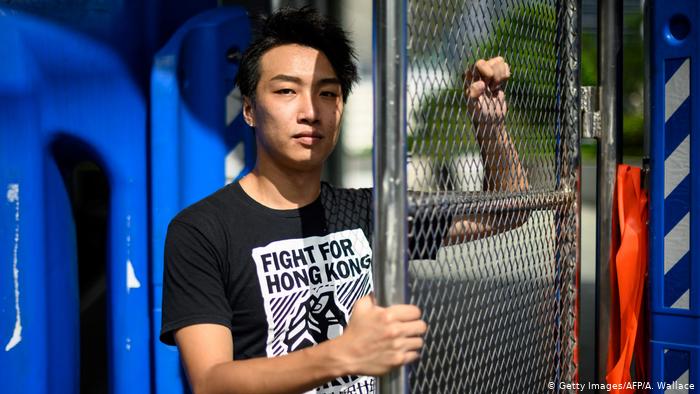 The protest is seen as a test for the movement’s strength following more than four months of unrest. Demonstrators are trying to maintain pressure on the government to respond to their demands, which include full democracy and an independent inquiry into alleged police brutality.

Hong Kong has seen relative calm over the past two weeks after violent protests sparked by the invocation of colonial-era emergency laws last used in the city more than 50 years ago, including a ban on face coverings, which protesters defied at recent rallies.

Ahead of Sunday’s protests, hundreds of people gathered for a prayer sit-in on Saturday night, and on Friday protesters formed a human chain along the metro network.

In the past, thousands of people have defied police to stage mass rallies. These rallies have often begun peacefully but then devolved into violence at night.