Johnson sent a trio of letters to the EU: One unsigned requesting a Brexit extension, a copy of the law requiring him to request the extension and one arguing against an extension. The EU will now consider his request.

British Prime Minister Boris Johnson sent three letters to the European Union on Saturday night after the UK Parliament forced him to request another Brexit delay.

The first of the letters sent to European Council President Donald Tusk contains the request for an extension that he is legally required to deliver. Johnson refused to sign the letter, which was a photocopy of a draft set out in UK law.

The second letter Johnson sent to the EU argues against granting an extension to the United Kingdom, saying that a further Brexit delay would be a mistake. The third message was sent by the British ambassador to the EU, Tim Barrow.

“I have made clear since becoming prime minister and made clear to parliament again today, my view, and the government’s position, that a further extension would damage the interests of the UK and our EU partners, and the relationship between us,” Johnson said in the third letter, first tweeted out by the Financial Times‘ Brussels correspondent.

Tusk confirmed receipt of the letter containing the request for a Brexit extension and said he will now begin to discuss it with EU leaders. 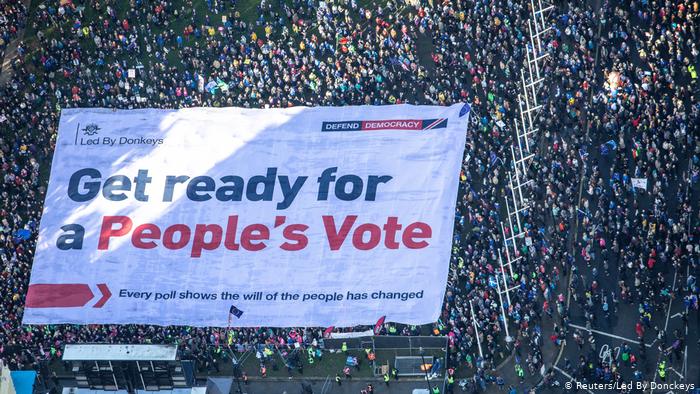 Johnson bound by law but unhappy about it

The UK government was legally obligated to request an extension of the Brexit deadline after lawmakers voted earlier on Saturday to delay parliament’s approval of the Brexit deal London negotiated with Brussels and which was approved by European leaders on Thursday.

At an extraordinary Saturday parliamentary session, UK lawmakers voted 322-306 to withhold their approval of the Brexit deal until legislation regulating its implementation had passed.

Johnson, who had said he would rather be “dead in a ditch” than delay Brexit again, made clear that he was sending the request letter under duress. Earlier in the day, the British prime minister told lawmakers “further delay would be bad for this country, bad for the European Union and bad for democracy.”

The British Parliament’s vote on Saturday was a move to stop the UK from leaving the EU by the October 31 deadline without a transitional deal in place, because the necessary legislation couldn’t be ratified in time.

Frustrated EU leaders in no rush for extension

There is little chance that the 27 EU member states will refuse Johnson’s request for a Brexit extension, but officials have made clear they will take their time.

“We won’t be rushed by any request,” said one EU diplomat.

However, the EU would need to step in if it became more likely that the UK was headed towards leaving the bloc without a deal by October 31.

EU leaders could agree to any new Brexit date at an emergency summit that could possibly be convened next weekend. Their ambassadors are set to meet in Brussels on Sunday morning.

French President Emmanuel Macron has been outspoken about the need for “quick clarification of the British position on the accord.” The president’s office said Macron expressed to the British prime minister that “a delay would be in no one’s interest.”

Despite these misgivings, the EU has made clear that its first priority was to avoid any no-deal Brexit. For an extension to be granted, the EU leaders must be unanimously in favor of it. When asked whether there was a serious risk that Macron could refuse it, another EU official responded: “No.”

“If there is a chance of a deal, they will never choose no deal,” said Nick Petre, spokesperson for the Renew Europe group of liberals in the European Parliament, of which Macron is a member.

How long will the extension last?

There is a possibility that the EU could grant a monthlong “technical extension” until the end of November in order to maintain pressure on the UK to rubber-stamp the deal.

One EU diplomat said the duration and conditions of an extension would depend on the purpose of the request.

“If we still hope to be able to salvage this deal, we’d be looking at shorter ones,” the diplomat said. “Then, if we are looking at elections or second referendums, a longer one would most likely be needed. At this stage, it really depends on what happens in Britain in the coming hours.”

In Brussels, many believe that any Brexit delay could not extend past mid-2020, because the bloc requires the rest of the year to prepare its long-term budget from 2021, and needs to know where the EU’s relationship with the UK stands, financially and otherwise.