On a day in early March, volunteers are clearing the Odesa City Garden of rotten wooden beams, stones and bags of rubbish. This is the first Saturday clean-up day, and it’s been organised by locals involved in defending the Summer Theatre, which is located in the garden.

The theatre is a longstanding symbol of the struggle between Odesa residents and their local government. In 2016, the city council leased this part of the historic centre to a private company for 49 years.

“We believe this company could belong to Volodymyr Galanternik,” Svitlana Podpalaya, an activist with the Green Leaf organisation, tells me when we meet in a nearby cafe.

Podpalaya shows me a pile of documents – maps, sociological surveys and development blueprints – that she has been collecting on the Summer Theatre for two years. Before getting involved in the anti-development campaign, Svitlana was a member of the city’s Second of May Committee that investigated the tragic events of spring 2014 in Odesa, which left nearly 50 people dead and 250 injured. 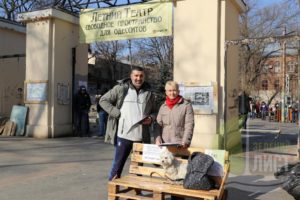 “Our activities at the Summer Theatre began when activists saw a decision by the city council’s ‘green commission’ to fell all the trees in the park,” says Podpalaya. “We realised that the council was brazenly trying to take over this territory. That was the end of a quiet life for me.” She tells me that an eight-storey shopping and leisure centre with an underground car park is also due to be constructed here.

Businessman Volodymyr Galanternik is considered Odesa’s “informal” mayor: in a 2018 article, Ukrainian media Novoye Vremya called Galanternik, who allegedly owns a number of properties in the city, the “boss” of Odesa.

According to the Organised Crime and Corruption Reporting Project, Galanternik is close to Gennady Trukhanov, the city’s mayor and a former member of ex-president Viktor Yanukovych’s Party of Regions. Trukhanov’s current political party (Trust in Deeds), and the Petro Poroshenko Bloc which supports it, together have a majority in Odesa’s city council, which allows planning decisions in the city to be made easily. Galanternik has not commented to the media on his business or influence in the city.

Vitaliy Ustymenko, one of the city’s most active anti-development campaigners, also mentions Galanternik’s influence in Odesa. “After 2014, the Trukhanov-Galanternik business group, which came to an agreement with central government, began to take over the city,” Ustymenko says. “Odesa was simply handed over to these guys in return for election results.” And now, just before this year’s presidential election, Trukhanov has offered his support to Petro Poroshenko during a presidential visit to the city.

“Some law enforcement units are part of the Galanternik-Trukhanov group” Ustymenko tells me. His claim is confirmed by events in November 2017, when locals arrived at the Summer Theatre, demanding to see trees that were to be felled. But that day, the theatre had been closed to visitors. The area around it was cordoned off by police and “titushki”, informal groups of young men who provide street muscle for unpopular causes. Scuffles broke out between the police and activists, with both sides spraying one another with tear gas and the cops weighing in with batons, and several members of far-right group Right Sector, who had taken the side of locals, were arrested.

November 2017: City Garden, Odesa
“I noticed how the police behaved with Bosenko,” says Podpalaya. “He’s now in the private security business, but the police look at him like he’s their boss. Police reform in Odesa has been a disaster. It just represents the interests of the developers.”

After Podpalaya got involved in the protest movement, she began to worry about her safety. In June 2017 she was attacked right outside her home – thugs sprayed her with tear gas and then hit her. After that, she decided to be open about any pressure she was subjected to.

Vitaliy Ustymenko, who is also head of Odesa’s AutoMaidan group, also suffered an assault. In the summer of 2018, two men attacked him with a knife after he left a local TV station. Then, this February, one of the men suspected of organising the attack was released from pre-trial detention, and all the witnesses to the crime refused to give evidence against him. “Unless they hand the case over to a different investigative department it will fail, because the police are so ineffective,” Ustymenko tells me.

The project for developing the Summer Theatre site isn’t the only source of protest in Odesa. The city’s residents are also trying to stop new construction on its central Lanzheron beach. Two buildings have already been completed: a dolphinarium and a hotel, which, according to the activists I interviewed, belongs to the developer to whom the city council leased the Summer Theatre. 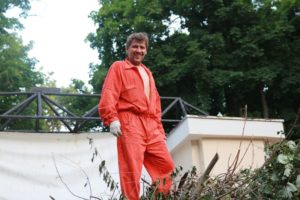 Prior to the development, there was an alley that led to the beach between the hotel and the dolphinarium. But then plans emerged to build on this land too, although there were two injunctions against this project. The first came from the State Architectural and Construction Inspectorate of Ukraine, which in September 2018 revoked its permission to build on the beach (although the ban had no effect).

The second ban came in January 2019, when a workman, Vadym Pavlyuk, was crushed to death by a crane on the alley construction site. “Corrupt schemes lead not only to the loss of spaces that are important to Odesa society, but also human casualties,” Vladyslav Balinsky, an ecologist who was one of the first witnesses on the scene in January, tells me.

“The main task of the police immediately after was to keep members of the public off the site, to avoid anyone seeing the body,” says Balynsky. “But later, people from a security firm turned up – in plain clothes with no signs of identification, although they were obviously from the Zeus private security company. The security guards grabbed and jostled the journalists who had come to cover the incident.”

Protest actions, pickets and court hearings are now a prominent element in the lives of local activists. Their constant standoffs with the police and the city authorities do nothing to stop the construction firms, which appear to have found a common language with the city council. And this state of affairs evidently also suits central government, which has the support of Odesa’s mayor as Ukraine’s 2019 election cycle gathers speed.